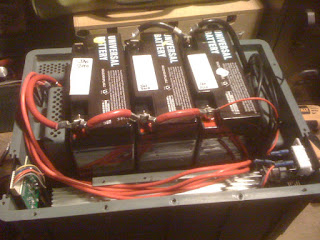 Tonight I replaced the batteries in the power brick. The old ones were over two years old, and I hadn't really tended them properly. I'm going to try and recondition them for use, but inside the brick (Xantrex xPower 1500) went three new 18Ah SLA batteries.

The Xantrex opened up really easy - lots of screws, so I wanted to use the drill - but the screws are hard up against the case wall. I could have gotten them with a regular screwdriver, but with 20+ screws to do I decided to drop $7 on an extension from OSH. This is basically a rigid spring that gives the drill the reach of a normal screwdriver.

Inside was three 17Ah SLA batteries robustly wired in parallel, the inverter, and some foam to stop the batteries moving too much. Also two panels - the main one with AC outlets and switches and the "battery test" LEDs, and another with just a car-style DC jack.

At first the bank didn't want to take a charge, the AC charger went straight to green light (which I guess is triggered by bank voltage?). Voltage was below 13 so I'm not sure what was going on... can't believe they were fully charged coming off the shelf. It was pretty cold outside which maybe changes things. Ah, I don't know. Load tester was unavailable (long story), so I ran a lamp for an hour to discharge the bank a little. After that the bank started taking a charge.

The other weird thing is that the "battery test" meter has stopped working. It's just a rocker switch and a bank of LEDs, but now the LEDs don't light up. Not helping. I'll have to check it out... in theory I should be able to fix it, in practice I tend to screw these things up =]